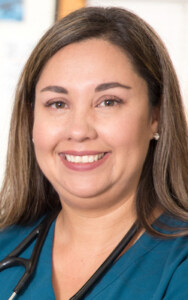 For Yadira Caraveo, becoming a pediatrician, an accomplished legislator, and a successful advocate for children all started with a dream: her parents’ dream.  Yadira’s parents came to Colorado from a small town in Mexico, looking for a better life. They didn’t have much education or much money, but they knew that hard work and caring for others are the values that build strong communities and family. They raised their four children with those values — on a construction worker’s pay in the Adams County home they still live in — doing whatever it took to put them on a path to success.

All four were able to go to college and graduate in the span of a single generation, an incredible testament to the American Dream. Yadira had big dreams for herself as well, knowing from an early age she wanted to help people as a doctor. She attended public schools in Adams County, received a degree from Regis University, and continued on to medical school at the University of Colorado.

Even before she finished her medical training, advocacy for others became an important part of Yadira’s life. She helped organize her fellow medical residents for better working conditions, becoming a union representative with SEIU. And she was named a Champion of Change by President Obama for her work with the Union of Concerned Scientists enlisting doctors across the country in the fight against climate change.

Yadira chose to be a pediatrician in Adams County, but with 65% of her patients’ families on Medicaid, she quickly understood that truly helping children required a lot more than what she was able to do as a doctor. Too many families she saw were falling through the cracks, struggling with job opportunities, health care costs, child care, and paying rent. Worse, when it came to addressing these problems, Yadira saw a lot of talk out of the state legislature — but few results for those who needed them most.

Determined to break through the rhetoric and replace it with action, Yadira became a state legislator and quickly gained a reputation for taking on tough fights and working with anyone to get things done. In only one and a half terms, Yadira’s success has been remarkable, especially in such a short time: Yadira worked to pass historic legislation to force drug companies to lower the cost of prescriptions, drastically limit the toxic pollution that is endangering our kids’ health and our planet, expand funding for preschool, ensure all Coloradans have access to paid family and sick leave, and protect renters from eviction during the pandemic.

Along the way, Yadira stood up to the biggest corporate bullies and entrenched special interests: big drug and insurance companies, oil and gas CEOs, and even big tobacco.

Despite a heavy workload at the state capitol and a schedule filled with community meetings and outreach, Yadira still works as a pediatrician in a practice that is more like a family than a medical office. She even added extra weekend hours so she can still see her patients while the legislature is in session during the week.

Looking at Washington, Yadira feels the same sense of frustration — of all talk and little action — that drove her to run for state office. And it’s why she’s now running for Congress.

In Congress, Yadira will continue her commitment to the families she sees every day in Colorado, building on her work to lower health care costs, address the high cost of housing, combat climate change, protect a woman’s right to choose, and stop Republicans from taking away Americans’ right to vote.

Because Yadira understands how the health care system works from the inside, she’ll bring a unique perspective to health care reform, and the fight to lower drug and insurance costs and expand access to quality care.

In Congress, Yadira will be driven by the same values her parents taught her and her siblings — to work hard and always finish what you’ve started, and to jump in to help without being asked. She will fight to make loud the voices of Coloradans long ignored in Washington, particularly those of Brown, Black and Indigenous communities.

Yadira still lives in Adams County, not far from her parents, and her life is still filled with large family gatherings of relatives near and far, lots of food cooked with love and togetherness, support and a little teasing from her brothers, and endless conversations with her sister.