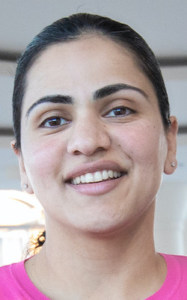 Aisha Wahab’s background is rich in trials and perseverance. Aisha was born in New York City after her parents fled Afghanistan due to war and communism. Before she could tie her own shoes, Aisha Wahab was placed in foster care when her father was brutally murdered, and her mother died at an early age. Eventually, Aisha was adopted by a young couple and raised in Fremont. Aisha’s adoptive parents were small business owners who taught her the principles of hard work, learning from every opportunity, and the importance of community service.

Aisha’s public education received her B.A. from San Jose State University, and an MBA from CSU East Bay. Aisha is currently working to complete a doctorate with a focus on reducing economic inequality. Aisha lived and worked in every city in the district but everything changed due to the economic downturn of the Great Recession. Aisha’s family business suffered and soon her family home was foreclosed, and eventually priced out of Fremont. That’s when she moved to Hayward – a more affordable city – and quickly found a job at CSU East Bay and worked on campaigns to make a better life for herself and her family.

Aisha served as the Chair of the Human Relations Commission of Alameda County – a position she was elected to by her peers three times in a row, a Public Health Commissioner during the implementation of the Affordable Care Act, a board member of several local non-profits, including the Afghan Coalition (supporting clients with mental health services, domestic violence support, etc.), Tri-City Volunteers (a food bank), and Abode Services (housing provider). Aisha worked with community groups in Hayward on issues such as housing, public safety, and more. Aisha has been an organizer and speaker at the Bay Area Women’s March and was selected to join the White House Roundtable of Afghan-American Leaders, and the White House Initiative on Asian Americans, Native Hawaiians and Pacific Islanders(WHIAANHPI) Northern California Regional Network Roundtable.

Frustrated by the lack of progress, Aisha ran for Hayward City Council to amplify the voices of residents – with a special focus on seniors, women, and children.  Aisha Wahab went on to become the first Afghan-American woman ever elected to public office in the United States of America. Aisha received the highest number of votes to become the youngest woman ever elected to the Hayward City Council in 2018.

As Mayor Pro Tempore & City Council Member of Hayward, Aisha has implemented policies that reduce economic inequality, expand homeownership opportunities, support small businesses, made Hayward safer for all, and strengthened safety nets for seniors, renters, workers, and women. For Aisha, making policies that work for everyone is personal.

Aisha was the first in Alameda County to introduce an eviction moratorium for both commercial and residential properties to ensure no one loses their property due to an international health pandemic, something all too familiar for Aisha. This was later adopted by the Alameda County Board of Supervisors. Aisha also spearheaded Hayward’s small businesses receiving $5,000 grants within weeks of the pandemic, renters and landlords received aid, and the nation’s first free COVID testing site.

Aisha’s leadership on City Council has been recognized by the East Bay Young Democrats as 2019’s Local Legislator of the Year, and in 2020 was named by Alameda Labor Council as a Woman to Reckon With, and in 2021 as the League of California Cities’ Woman of Influence. Recently, Aisha was named as one of San Francisco Business Times’ 2017 “Most Influential Woman in Business”. Her work has also been highlighted in San Francisco Magazine’s “The Resistance” and Oakland Magazine’s “Aisha Wahab Makes History”, while also being featured on KQED’s “Forum” and her campaign was featured regularly on KQED’s “The Long Run”. Aisha was also named an American Graduate Champion by KLRU via a grant by the Corporation of Public Broadcasting for her passion for education.

Aisha’s greatly respected community work has garnered attention as she has been honored by Senator Bob Wieckowski with the “Unity Award” in 2017, Assemblyman Bill Quirk named her “Woman of the Year” in 2019, CSU East Bay named her 40 Under 40 in 2018,  “Inspirational Woman of the Year” by Assemblyman Kansen Chu in 2016 and of course, the East Bay Young Democrats Local Legislator of the Year in 2019- to name a few. Aisha was also selected to be a part of the White House Roundtable of Afghan American Leaders as well as being invited to the White House’s Annual NowRoz event.

She has been featured on CNN’s Jake Tapper, MSNBC, FOX News, the New York Times, the Washington Post and many other publications on a wide variety of issues from housing, the current Afghan refugee crisis, women’s rights, and more.

Aisha is running for State Senate because no one should have to get lucky to achieve the California Dream. Aisha is the trusted leader with a proven track record and more importantly the heart to serve the people of California. She will fight for housing for all incomes, investments in public education, public safety and justice that works everyone, small businesses that create local jobs, and for a strong safety net for our most vulnerable community members. She will deliver policies so that everyone’s dream can be possible. That is what Aisha will fight for – us.