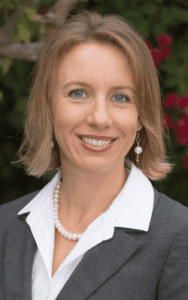 A fourth-Generation Encinitas resident, Catherine Blakespear grew up in Del Mar and Cardiff, where she attended Torrey Pines high school. She was a three-time MVP of her varsity basketball team and captain for two years. She then attended Northwestern University in Chicago, where she earned her bachelor’s and master’s degrees in journalism.

After five years as a print journalism reporter, writer and editor for the Los Angeles Times and the Associated Press, she attended law school at the University of Utah, where she served as editor-in-chief of the Journal of Law and Family Studies, graduating in 2006.

As an attorney, Catherine clerked for a justice on the Utah Court of Appeals before working for a large law firm, and eventually co-founding a woman-owned law firm focusing on estate planning.

Catherine and her husband moved back to her hometown of Encinitas in 2009, where she joined the city’s Traffic and Public Safety Commission. At the end of her term, she was elected to the Encinitas City Council in 2014. She was subsequently elected Mayor in 2016, and re-elected in 2018 and 2020 by double-digit margins.

In December of 2020, she was unanimously chosen in a bipartisan vote to be the Chair of SANDAG, San Diego County’s powerful transportation agency. She is also a member of the county’s Airport Authority and the Regional Solid Waste Association board.

Catherine and her husband Jeremy live in Cardiff with their two teenage children. They enjoy backpacking, biking and harvesting fruit and honey from their backyard.