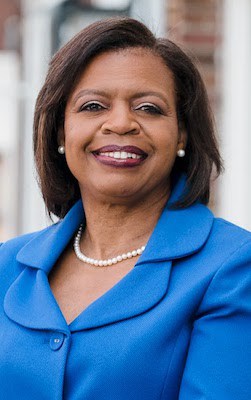 Cheri Beasley is a mom, fighter, and public servant. She has devoted her life to serving the people of

North Carolina. After earning a law degree, Cheri worked as a public defender in Fayetteville. She won her first election asdistrict judge shortly after she and her husband Curt welcomed their twin boys, Thomas and Matthew.

Cheri is the only candidate in this race to have won statewide twice. She also made history in 2019 by becoming the first AfricanAmerican woman to serve as Chief Justice of

the North Carolina Supreme Court. As Chief Justice, Cheri took on the school-to-prison pipeline, implemented a paid family leavepolicy, and worked to make our courts more fair and transparent.

If elected, Cheri would make history again as the first African American woman from North Carolina. There are currently just24 women and zero Black women serving in the U.S. Senate.

Cheri has seen how Washington has left North Carolinians behind – and how laws impact, and sometimes fail, people in NC. Sheis running for Senate because it’s time for that to change, and she will fight for the people of North Carolina every day in theSenate. Cheri Beasley has been endorsed by over 180 state leaders, including 100 clergy leaders, EMILY’s List, End CitizensUnited // Let America Vote, Congressional Black Caucus PAC, The Collective PAC, and more.