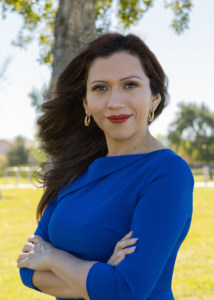 Esther has dedicated her life to improving the lives of others through her work as a policy advocate and community organizer. Her focus has been to protect our local air and water, improving working conditions for all workers, including in the growing warehouse sector, and to facilitate the urgency of immigration reform.

Her remarkable record in the Inland Empire includes organizing communities of color living near warehouses who were constantly threatened by high levels of deadly pollution from diesel trucks and displacement. With her leadership, she was able to obtain community benefits for frontline residents most impacted by air pollution.

Esther’s leadership in the nonprofit sector for over 20 years has consisted of being a founder of Warehouse Workers United (now known as Warehouse Workers Resource Center), an organization that has supported the plight of warehouse workers seeking better working conditions. She has also worked on campaigns to eliminate perchlorate contamination from drinking water and has led campaigns to increase voter registration and turnout across the Inland region.

That’s why Esther Portillo has earned the early endorsements from Riverside County Assemblymembers Jose Medina (who currently represents most of the new district), Senator Connie Leyva, Assemblymember Sabrina Cervantes, and Assemblymember Eduardo Garcia, along with a growing list of local elected and community leaders from the district.

Currently, Esther serves as senior district representative for Assemblymember Jose Medina and provides insight and representation on issues concerning housing, business, labor, the environment and community development. Esther is a proud daughter of immigrants from El Salvador, who has been living in the Inland Region since 1988 and now lives in Moreno Valley with her two children.

Map of District
Scroll to top