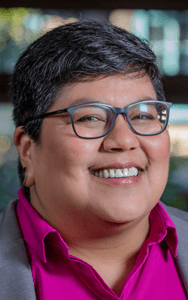 Georgette Gómez’s life’s work ia  a lifelong advocate for the underserved who can’t be bought and never backs down from fighting for us.  As a community organizer, Georgette Gómez led the Toxic Free Neighborhoods Campaign to protect kids from lead paint and keep corporate polluters out of residential communities. And she got her start working as a crisis counselor with survivors of domestic violence and abuse.

The daughter of immigrants, Georgette’s calling has always been making a real difference for working families, who right now are struggling in so many ways.

Georgette is the founder of Toyon Strategies, a firm dedicated to advance intersectional justice through strategy and policy support. In continuing her service to her community, Georgette serves on the board of multiple community- based organizations, such as Canyonlands and Dreams for Change. In 2021, Georgette was appointed to the Board of Directors for the San Diego County Air Pollution Control District, County of San Diego Air Pollution Control District, AB 32 Environmental Justice Advisory Committee member at the California Air Resources Board, and member of the Board of Environmental Safety for the Department of Toxic Substances Control.

A first generation Mexican-American and native San Diegan, Georgette grew up right here in San Diego’s Barrio Logan community to working-class immigrant parents — her father was a gardener and her mother worked minimum wage jobs.  Georgette is a graduate of San Diego State University and holds a BA in Environmental and Natural Resource Geography. Georgette lives in San Diego with her wife, Dr. Raquel Pacheco, their dogs Canela, Totoro and Yoda, and their chickens.