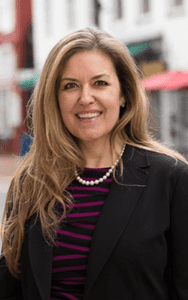 Congresswoman Jennifer Wexton has been serving the people of Northern Virginia and Shenandoah Valley for two decades as a prosecutor, advocate for abused children, state Senator, and now a member of the U.S. House of Representatives from Virginia’s 10th District.

In her legal career, Jennifer served as an Assistant Commonwealth’s Attorney for Loudoun County, prosecuting felony and misdemeanor criminal and traffic cases in all of the Loudoun Courts. She later served as a court-appointed guardian ad litem, representing abused or neglected children, as a special justice in mental commitment hearings, and as a substitute judge in proceedings in Loudoun County’s district courts.

Jennifer took her passion for protecting others to the state Senate, winning a special election in January 2014. In her five years in Richmond, Jennifer found bipartisan support for her legislation to make our children safer, combat the heroin and opioid epidemic, increase access to affordable healthcare, prepare our children for jobs of the future, ease traffic congestion, and bring more businesses to Northern Virginia.

Jennifer came to Congress with experience in legislating and a deep understanding of Virginia’s 10th district and the issues that matter most to our region’s families. In Congress, Jennifer has worked to make health care more affordable for our families, keep our kids safe from gun violence, and has fought to protect the interests of federal workers and contractors in our region. She has introduced 17 pieces of legislation in her first term, passing four bipartisan bills through the House, with her recently introduced Retirement Protection Act being signed into law as a part of the CARES Act Coronavirus response.