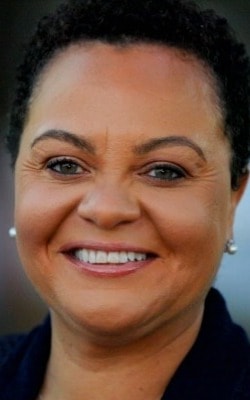 A native New Orleanian, Karen Carter Peterson has spent the past 20 years in service to the people of New Orleans and Louisiana both as a legislator and civic leader.  Karen grew up in the Central City neighborhood with her mother Gigi Carter, her father Ken Carter, and two sisters Eileen and Tara. Married for over 50 years, Karen’s parents worked hard to teach their children the values of hard work, respect, humility, and the importance of public service. Her late father, Kenneth M. Carter, was a trailblazer – becoming one of the first African-Americans to integrate Loyola University’s undergraduate program in 1962. After graduating law school and becoming a successful trial attorney, he became the first African-American president of the Louisiana Trial Lawyers Association; Mr. Carter had a long successful career in law, business, and politics. He was the first African-American elected assessor in the state of Louisiana, founder of the Black Organization of Leadership Development, and a lead attorney in the landmark legal trial against the tobacco industry. Karen’s mother, Gwendolyn Carter, was also active in local politics and successful business owner.

Karen’s parents believed that education was critical in preparing their children to achieve their goals. Karen attended Mercy Academy and after graduation moved to Washington, DC to attend Howard University. Karen graduated with a degree in International Business and Marketing from Howard University School of Business in 1991. She later earned a law degree from Tulane University School of Law. During law school Karen was afforded the unique opportunity to attend both Boston College Law School and the University of Virginia’s Law School as a visiting student.

Karen was introduced to politics and learned the importance of public service at an early age. In 1978– as an eight-year old – she knocked on doors with her father and family friends to help elect New Orleans’ first African-American mayor, Ernest “Dutch” Morial. Emulating her parents’ involvement in local politics, Karen and her friends created NOKPG – New Orleans Kids Political Group. NOKPG worked to register voters and inform neighbors about the growing interest among African-Americans in the need to improve local communities and advance civil rights through political action.

Public service would become her calling. Although only 50 years old, Karen has worked for more than 40 years to expand voter participation in local communities and served more than twenty years advancing civil rights as a member of the Louisiana Legislature. First elected to the Louisiana House of Representatives in 1999, Karen immediately established herself as a powerful force in the legislature. Over the course her 11 years in the state House, she served in many important roles, including: House Appropriations Committee, Joint Legislative Budget Committee, House Governmental Affairs Committee, and ultimately rising up the ranks to become House Speaker Pro Tempore from 2008-2010.

After hurricanes Katrina and Isaac, Karen became the first woman to chair the House Insurance Committee, and chaired the joint legislative Hurricane Recovery Committee. In 2010, Karen won a special election to the Louisiana Senate – representing the 5th district in New Orleans, which encompasses a stretch along the Mississippi River from Canal Street to Jefferson Avenue and includes the Central Business District, Warehouse District, Garden District, Central City, and parts of Uptown, Mid City and Carrollton neighborhoods.

Karen has spent her entire career as a tenacious advocate and earned a well-deserved reputation as a fearless, battle-tested leader who does not back-down from a fight. Karen has helped to create a smarter, safer, and more prosperous New Orleans. For years, she battled powerful special interests in Baton Rouge on behalf of our hard-working families to: expand Medicaid; promote equal pay for women; raise the minimum wage to a living wage; save Louisiana’s coastal wetlands; and institute paid family leave. Karen fought and won the battle to bring New Orleans schools back under local control. Karen authored Louisiana’s first legislation to ensure automatic voter registration; she’s fought to expand voting hours to make sure working people have a voice in the process; and, in 2012 won an election to become the first African-American woman to serve as Louisiana’s Democratic Party Chair.

Karen lives in New Orleans with her husband, Dana Peterson.