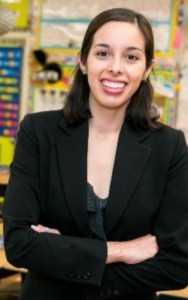 Kelly Gonez serves as President of the Los Angeles Board of Education and proudly represents Board District 6, which encompasses most of the East San Fernando Valley.

During that time, she championed the needs of the most historically underserved students as a Board member. She has authored policies leading to increased services for homeless students and removing barriers to college for our high-needs students. Kelly has helped to increase investment in early childhood education in Los Angeles Unified and pioneered the expansion of ethnic studies for all students in the District, including as a high school graduation requirement. She has been a voice for increased investment in public education, devoting countless hours to advocating for our State and Federal governments to provide more funding and resources for our public schools.

Kelly grew up in an immigrant family and was the first in her family to attend college; while earning her undergraduate degree at UC Berkeley, she worked three jobs, over 50 hours a week, to pay her way through college and support her working family. After she graduated college, she returned to the Northeast San Fernando Valley to be a math and science teacher in LAUSD.

She also previously served as an education policy advisor in President Obama’s administration, where she led initiatives to support English Learners, homeless students, immigrant students, and foster youth, among others.

Kelly lives with her husband and two young children in North Hollywood.