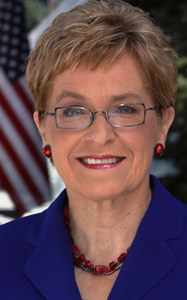 Office Seeking:  US House of Representatives-Ohio 09

The daughter of a Polish-American, working-class family, Marcy’s life and service mirror the bootstrap, hardworking nature of her district. Her family ran a small grocery and her mother also worked at Champion Spark Plug, where she helped organize the workers into an auto trade union.

Marcy Kaptur began her public career as an urban policy adviser to President Carter. She and her colleagues crafted numerous bills on housing and urban development, including the Community Reinvestment Act. In 1982, while pursuing a Ph.D. at MIT, she was recruited by local Democratic Party leaders to run against the incumbent Republican, whom she defeated in an upset that attracted national attention.

Today, Marcy is the longest serving woman in the House of Representatives, and is Chair of the House’s Energy and Water Appropriations Committee. She has been able to leverage her experience and seniority on the Appropriations Committee to secure vital federal investments for the Ninth District, focusing on jobs, economic growth, infrastructure and support for veterans and our military. Working across party lines, she fought for and succeeded in the creation of a National World War II Memorial on the National Mall to honor our Greatest Generation. The idea came from a constituent at a community event, proving that in our democracy the best action comes from the bottom up.

Marcy has dedicated her career in public service to fighting for all Ohioans to have a fair playing field in order to achieve economic and health security. That includes fighting the special interests in Washington to make sure the federal government is working for the American people, not wealthy donors and lobbyists. This is nowhere better illustrated than in her decades-long fight against unfair trade deals such as NAFTA and CAFTA that have hollowed out our middle-class sending good paying Ohio jobs to low wage countries overseas and hollowed out our communities.

Marcy is a champion for the Midwest in Congress. She is focused on getting big money out of politics, holding Wall Street accountable, ensuring access to health care for all, reducing the costs of prescription drugs, ensuring affordable quality education for all who seek it, and restoring our Great Lakes economy and environment.

Marcy has never forgotten where she came from. Once in Congress, she secured investments from the Environmental Protection Agency to clean up the very Champion Spark Plug site that her mother worked at years ago, helping to make it safe for new economic development and residents living around the plant. She continues the fight to restore neighborhoods and town squares throughout northern Ohio.

She is a true fighter for working people.