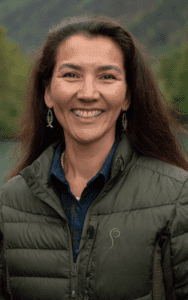 Office Seeking: US House of Representatives Alaska At Large

Mary Sattler Peltola is a Yup’ik Eskimo, salmon advocate, and Democrat who represented the Bethel region in the Alaska House of Representatives for 10 years.

Mary was raised on the Kuskokwim River in Kwethluk, Tuntutuliak, Platinum, and Bethel. She began fishing commercially with her father when she was six years old. She studied elementary education at the University of Northern Colorado and worked during college as a herring and salmon technician for the Department ofFish and Game.

At age 22, Mary began an internship with the Alaska legislature.That same year, she ran for office and lost. Two years later, married and pregnant, Mary won her election and began representing the Bethel region in the Statehouse.

As a lawmaker, Mary helped rebuild the Bush Caucus, which passed legislationand influenced budgets that improved lives in rural Alaska under her tenure as Chair. After leaving the legislature, she worked as Manager of Community Development and Sustainability for the Donlin gold mine project. After a tailings impoundment failed on the Fraser River in British Columbia during Chinook and Coho runs, she left the company and later joined the Kuskokwim River Inter-Tribal Fish Commission.

As Executive Director of the commission, she helped mobilize 118 Tribes and rural Alaskans to advocate for the protection of salmon runs in Western Alaska. This was a continuation of her work as a Salmon Fellow with the Alaska Humanities Forum.

Mary served on the Orutsararmiut Native Council Tribal Court and the Bethel City Council, and on the boards of the Nature Conservancy, the Alaska Humanities Forum, the Alaska Children’s Trust, and the Russian Orthodox Sacred Sites in Alaska.

In the summer, Mary and her husband Gene can be found with their seven children and two grandchildren fishing on the Gweek River, and at their fish camp on Steamboat Slough on the Kuskokwim River.