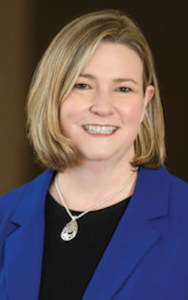 Nan grew up in a small town in Indiana and moved to Ohio to attend the University of Dayton,  becoming the ﬁrst person in her family to graduate college. She learned the values of hard work, strength, and resilience from her dad, a union autoworker who lost his job but never lost his dignity, and her mom, who went to work at a laundromat to help make ends meet.

When Nan was first elected Mayor in 2013, Dayton was at a low point. The factories had moved out and the opioids had moved in. But in Dayton, folks don’t run away from their problems.   Under her leadership, Dayton has turned a corner. She brought folks together to take on the community’s toughest challenges, including tackling the opioid crisis, cutting overdose deaths by half and saving hundreds of lives. She led the fight to take on a broken education system and provide quality pre-k to every three- and four-year-old in the city. Dayton has become vibrant again as new people and businesses move into the city.

She was ﬁrst elected mayor in 2013 and has faced down some of the toughest challenges, including a KKK rally, a seriesof devastating tornadoes, and a senseless mass shooting that left 9 people dead. Each time, Nan stepped up and led hercity through its hardest moments. Under Nan’s watch, Dayton has turned a corner.

The city has seen hundreds of millions of dollars in new investment. Nan led the ﬁght to make Dayton the ﬁrst major cityin Ohio to oﬀer paid family leave for all municipal employees and to make high quality preschool available to every 3and 4 year old. She has become a national leader among mayors, being selected as the President of the United StateConference of Mayors.

Nan is running for Governor because she knows our state is fundamentally broken and Ohioans deserve better. The samespecial interests and corrupt politicians have been in charge for 30 years as our state has fallen further behind. The onlyanswer is a total overhaul. Nan knows we can build a better Ohio. An Ohio where one job is enough to provide for yourfamily. An Ohio where your kids have real opportunities. An Ohio where everyone — no matter your zip code — canthrive.

You can see our full list of endorsements at nanwhaley.com/endorsements