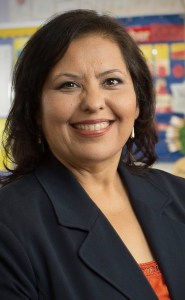 The Relentless Warrior for Justice

After graduating from UC Berkeley, Mónica earned her master’s degree in Social Work from the University of Southern California. Before that, she worked for Volunteers of America’s Talent Search Program as an academic advisor at Foshay Learning Center and Edison Middle School in LA Unified. It was there that Mónica felt she could change lives and systems. She found her passion in connecting public service and education. She began to connect the struggles she saw among students in her Eastside communities to those of immigrants, Latino, Asian and African Americans students in South LA. At the core it was time to face the racial and economic privilege with the public-school system and Mónica decided to help reform LAUSD. Having grown up in the same Eastside communities that walked out of high schools in 1968 in protest of unequal conditions, Mónica realized that while some of the rhetoric from the school district towards students of color and low-income families had changed, the district was still failing many of our students. In 2006, Mónica ran for and won a seat on the L.A. School Board, becoming only the third Latina to serve on the board in its 155-year history. She was honored to represent families and communities who carried on the demand for quality education and 100% graduation. Since her election to the board in June 2006, Mónica has successfully championed a change in attitude and behavior at the largest school district in the country with an elected board. Together with the community, she called for changes that would offer students smaller, more personalized settings and that give school sites the autonomy they need to prepare students for college and careers. She led the campaign to pass a $7 billion school bond, the largest in US history. Her efforts led to the construction of 131 new schools, adding more than 180,000 new seats for students and 300,000 great paying Union jobs. In addition, these funds created opportunities to leverage much-needed health and human services through the successful $50 million Wellness Center Initiative.

Mónica’s role at LAUSD was historic. She stayed above the rhetoric and empty promises while demanding the district serve all students and raise standards everywhere. Mónica embraced the student, parent, and community call for a plan to overhaul failing schools and raise expectations of the entire system. Monica also built a network of grassroots parents, students, labor, business and community leaders who advised her and helped push to improve our local public schools. Her work paid off. Since leading the charge of education reform at LAUSD graduation rates are up, college applications and acceptance are up, and overall expectations are up. The district also finally began to diversify as thousands of people of color became teachers, administrators and principals for the first time ever. In fact, as the graduates of 2019 crossed the stage, she thanked their parents for trusting and partnering with the LA Unified. “Many of these graduates today began kindergarten the year I joined the school board.” Overtime, we have changed ourselves and the LA Unified. There is still much to do, historically underserved communities and students are calling on the district to Close the Opportunity Gap, increase Equity and increase Restorative Justice programs. LAUSD was a gigantic ocean tanker ten times the size of the titanic moving fast and in the wrong direction. It took decades, and we are by no means done, but we have turned around a system of success for some at the expense of success for all. -Mónica

A hard-working go getter with integrity that gets things done.

Mónica, like most first-generation children, was raised understanding that those before her had sacrificed and struggled for her benefit. She benefited from the fight for civil rights and gender equality every day of her life and has committed to pay it forward. She is a loving, caring leader who is relentless about interrupting poverty, increasing safety, and empowering people. She has integrity, courage, grit, and has demonstrated that she is willing to fight for those not included in opportunities and wellness. She is someone who listens and seeks advice of residents and community leaders. More importantly, she has demonstrated a willingness to serve the most vulnerable in our community, tackle the toughest issues and produce a track record of success. That is what we need on the City Council – a doer, a trailblazer and community builder.