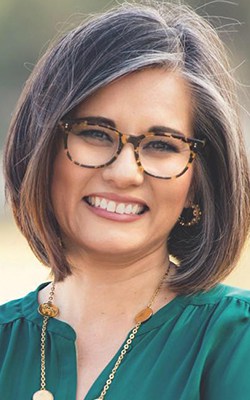 Monica Rodriguez became the third Latina in the City’s history to serve on the Los Angeles City Council on July 1, 2017, to represent the district she’s called home her entire life.

Councilwoman Rodriguez’ values are shaped by her immigrant family– her father’s youth spent as a farm worker, who later earned his citizenship through his military service in Vietnam. Upon returning home, he continued his service as one of the first Latino Firefighters on the LA City Fire Department after adoption of the consent decree.

Her first-generation experience and family history is the foundation of her lifelong work to ensure equitable access for disenfranchised communities, holding a deeply rooted belief that everyone deserves an opportunity to succeed. As Councilwoman, Monica has brought her tenacious, innovative and results-oriented leadership style to City Hall, bringing a new sense of urgency to tackle some of the most pressing issues facing our city: affordable housing, homelessness, expanding opportunities for youth, strengthening our small business community, and delivering greater efficiencies and improved city services to give Angelenos the quality of life they deserve.

Since taking office, she’s continued to deliver increased investment and expanded city services to a district that had been under-resourced for decades. As Chair of MRCA’s Upper Los Angeles Rivers & Tributaries, she led the creation of a regional plan, creating a recreation and conservation blueprint for increasing access to over 1.53 million residents currently residing in park poor communities. In 2019, she secured $26 million in capital and public safety investments for the 7th Council District, which includes establishing new parks, improving traffic safety, and fixing our aging infrastructure. Highlighting the Northeast San Fernando Valley as a cultural destination in the City of Los Angeles, Councilwoman Rodriguez has curated distinct cultural programming to bring the community together through signature events like: the Pacoima Dia de los Muertos Festival, Sylmar Taco Festival, the Mission Hills Holiday Night Market, and the largest above-ground mural in the San Fernando Valley, “Rushing Waters.”

As the first woman of color appointed to Chair Public Safety Committee, Councilwoman Rodriguez oversees nearly two-thirds of the City’s budget and works closely with police and fire departments to keep our city safe. In this role, Councilwoman Rodriguez created an innovative approach to shut-down illegal cannabis operations with utility cut offs, reformed emergency response and evacuation protocols to better protect families from wildfires, and expanded the Community Safety Partnership, an effort that increases the number of officers assigned to serve the San Fernando Valley with an emphasis in building more constructive relationships between the public and police. This work earned her appointment to serve as Chair of Public Safety for the National League of Cities.

She protected neighborhoods with the creation of the “Good Neighbor Policy” in response to a problematic homeless shelter, this policy standardized safety and security protocols for homeless shelter operations in the city and expanded efforts by establishing the City’s first Safe Parking site for RVs. Responding to the untenable numbers of homeless youth and families, Councilwoman Rodriguez launched the first of its kind “Navigation Hub,” co-locating LAUSD social workers with homeless services accelerating the process of getting unhoused families off the street and onto a better life.

Councilwoman Rodriguez’ work reflects her commitment to close economic inequities for women and minority communities. In 2015, as Founding President of Latinas Lead California, she led the creation of a statewide network that supports Latinas seeking public office. As Commissioner on the Board of Public Works, she reformed the city’s procurement and business practices, work she continues to champion today. She created the Small Business Academy and overhauled LABAVN (Los Angeles Business Assistance Virtual Network) creating competitive access, resulting in increased contracts awarded to women and minority owned businesses. As an executive at the California Association of Realtors, she led the statewide affordable housing trust fund, delivering workforce housing and established the Mortgage Protection Program that protected families from foreclosure during the recession. During her tenure at LA Unified, she co-founded the highly acclaimed F.I.R.E. Academy, an afterschool program launched in collaboration with LAFD and Los Angeles Community College District.

Councilwoman Rodriguez is a graduate of local public schools, a proud San Fernando High School Tiger and received her B.A. from Occidental College. She and her husband Raul reside in Mission Hills with their two children and their beloved dog Hercules.