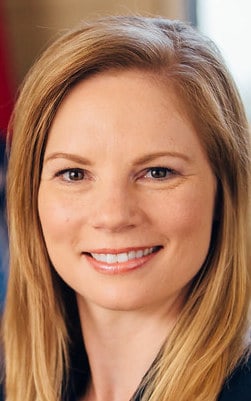 Nicole is running for Governor because she believes we need a New Way.  As Missouri’s State Auditor, she has been the taxpayers’ independent watchdog. She’s uncovered more than $350 million in wasted or stolen taxpayer money – and brought 50 criminal counts against corrupt public officials from both political parties.

Nicole’s background isn’t in politics. She grew up in Fenton, and like so many Missourians she was raised to respect the value of a dollar. As a kid, Nicole liked and was good at math, so she went to Missouri S&T, majoring in applied mathematics and economics. Then Nicole attended Mizzou, where she earned her MBA and became a licensed CPA and eventually a Certified Fraud Examiner. Nicole went on to serve as Boone County’s Treasurer and then Missouri’s State Auditor. Today, Nicole lives in Columbia with her husband, Jon, and her three young sons.

Nicole would expand Medicaid, restore coverage for those children, keep our rural hospitals open and implement an aggressive agenda to help Missourians cover the costs of health care. And she knows that we can do it without raising taxes.

As Auditor, Nicole has uncovered more than $350 million in wasteful spending and as Governor, she’ll make sure the days of secret deals, back-slap payouts and favors for insiders will be over. Instead of wasting that money on favors, it will go towards making health care more affordable and ensuring every child in the state gets a quality education, no matter where that child lives or how wealthy their family. It will go towards training workers for a changing economy and attracting the types of businesses that will offer them jobs.

Nicole has been the outsider in statewide government; the independent watchdog standing on the side of taxpayers, holding the powerful accountable to the people they serve, demanding transparency and fairness.