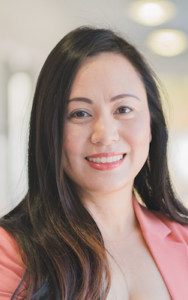 The daughter of Vietnam War refugees, Stephanie Nguyen experienced the struggles of growing up with limited resources. These experiences fuel her desire to serve others and help those most vulnerable. Like her parents, who fled persecution in their homeland for the refuge of America, Nguyen became a catalyst for change.

For the past 15 years, Nguyen has worked at the Asian Resources, Inc. (ARI) to ensure that all communities have access to support, services, and self-sufficiency. Nguyen has been the Executive Director for the past ten years. ARI serves the low-income, immigrant, refugee, limited English speaking, youth, formerly incarcerated and undocumented communities. With three locations throughout Sacramento County and one satellite office in Los Angeles County, Nguyen has fought to ensure that those less fortunate have a voice and can thrive. For the past ten years she has served as the Executive Director.

Despite an era of diminishing resources, Nguyen continues to thrive on expanding the possibilities for community development through the emphasis and implementation of creative and efficient use of existing resources. The ongoing global pandemic has not curtailed her passion nor her commitment. Nguyen has advocated for community testing and vaccine sites so that the most vulnerable communities have a place they can go to for testing and vaccines.

Prior to ARI, Nguyen was the Director of the Sacramento Asian Pacific Chamber (SACC) Foundation where she focused on developing new Asian Pacific Islander (API) leaders through the application of programs that helped them recognize and cultivate their individual strengths. The goal was to increase the quality of young API leaders in the region.

Nguyen also served on the District Attorney’s Multi-Cultural Council and is currently on the Sheriffs Community Advisory Board. She focuses on providing more opportunities to youth, combating violence, and being a strong voice to counter anti-Asian hate crimes.

In 2017, Nguyen was unanimously appointed to serve as the Councilmember for District 4 in the City of Elk Grove making her the first Asian-American woman to serve as a Council Member.

In 2018, she was elected citywide with over 65% of the vote to continue her term as the only woman on the Elk Grove City Council. Nguyen is a life-long Democrat. She and her husband of 13 years have lived in Elk Grove for over 18 years. They have two daughters, ages 6 and 11 years old.